Spring 2016 Commencement Ceremony – “Never Give Up Your Dreams”

A crowd of friends and family gathered on Saturday, May 14 at Eagle Memorial Gymnasium to celebrate the 38th Annual Commencement Ceremony with over one hundred Northern students receiving degrees and certificates.

Gabriella Trujillo, who graduated Magna Cum Laude from the Biology program, told the audience about her meaningful experience studying neuroscience with Dr. Ulises Ricoy in Northern’s infamous ‘Cockroach Lab’. She described not only the academic benefits, such as being exposed to rigorous research that has prepared her for grad school and a career, but also the solid relationships she forged with fellow student researchers in the lab. Trujillo is still considering her options post graduation, which are abundant , and plans to explore those options while working at Los Alamos National Laboratory (LANL) in the upcoming year. “I am considering medical school to become a pediatrician, veterinary medicine, or seeking a master’s degree in either neuroscience or microbiology,” said Trujillo.

David Roybal, a journalist and biographer, was the main commencement speaker and spoke eloquently about equal opportunity and discrimination. “Our country falls short with this,” Roybal told graduates, “and despite your accomplishments, systemic discrimination could still stifle your careers.” He offered a few examples, including his own experience becoming the first Hispanic editor of his university student newspaper. Roybal also highlighted accomplishments of a few Northern Spring 2016 graduates who pushed through barriers to achieve their goals.

The conferring of degrees was followed by an informal reception with family and friends outside the gymnasium.

On Friday, May 13 just over sixty students received a high school equivalency credential at Northern. Their friends and family filled the Center for the Arts auditorium making a standing-room-only crowd. Student speakers Blanca Quezada-Dominguez and Derek J. Hice spoke about their experiences of making the decision to reapply themselves to their education and make a better future for themselves.

Hice, who plans to attend police academy, described struggles in his life that led him to leave school at a young age. Instead of feeling bad about his past decisions, Hice said the HEP (High School Equivalency Program) at Northern helped him look forward to a bright future. “The people from HEP did not care about my past, they were only concerned about my future,” said Hice.

Northern’s Spring 2016 high school equivalency graduates inspired everyone in attendance with their dedication and self-determination, and the feeling of positive momentum was palpable in the auditorium.

Twelve Associate Degree Nursing graduates gathered in the Center for the Arts auditorium with friends and family earlier in the day on Friday, May 13 to celebrate the traditional nurse pinning ceremony, a ceremony that, according to ADN professor Nancy Novak, dates back to Queen Victoria’s presentation of a special pin to Florence Nightingale, recognizing Nightingale’s exemplary nursing efforts during the Crimean War.

Nursing faculty Ronnie O’Halloran, Chris Young, Nancy Novak, and Ana X Guttiérez Sisneros presented the soon-to-be ADN graduates with their pins. “Over five-hundred ADN students have done the pinning ceremony at Northern,” said Novak. “It is a right of passage that each nurse takes.

Student speakers Cathy Westley and Alfredo Lima described some of the challenges and rewards of pursing a nursing degree.

Westley, who is also President of the Student Nursing Association, said, “This is a very special day for my classmates and me; we could not have made it through this without each other. These are men and women who never gave up and never will give up.”

Keynote speaker at the pinning ceremony, Lucas Gonzales, former faculty member at Northern, told those gathered, “Nursing school is very demanding—it puts the hardiest of souls to the test—it’s a formidable course of study, but it has to be. You will no doubt be called upon to give life-saving interventions at some point in your career. You will never stop learning as long as you are in the nursing profession.”

While the pinning ceremony marks an official welcome to the nursing profession from the faculty who journeyed with each of the ADN students through their program, it is not the end of the road for the nursing graduates. Before entering the profession, each one must pass board exams to receive registered nurse (RN) licensure, a feat that the ADN faculty work hard to prepare each student for throughout their ADN studies. 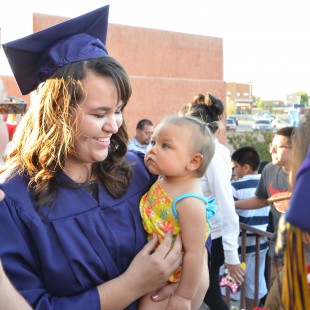