Española, NM - The Northern New Mexico College Foundation hosted a gathering for its 2015 scholarship recipients this June to celebrate their awards and discuss the next steps in the scholarship awards process at Northern.

More than 80 people attended. While the majority of attendees were students, many Northern staff, faculty and administrators attended along with Foundation Executive Director Terry Mulert who hosted the gathering. Special emphasis was given to the importance of students reaching out to donors to make a meaningful connection, share their gratitude, and to establish a line of communication that will allow donors to better understand the value of their philanthropy and its role in making social change in the Valley.

President Rusty Barceló addressed the group with a story of a scholarship that changed her life as an undergraduate student at the University of Iowa and special guest Stephen Price, a Northern graduate, shared some of words of wisdom as well.

In his remarks, Mr. Price emphasized the significance of the Northern Foundation scholarship that he received as a student at NNMC, and he encouraged the 2015 recipients to pay homage to their benefactors and to look for ways to give back to their communities.

"You never know exactly how things will unfold, but if you stay focused and work hard, I guarantee good things will happen. It worked for me, and this Foundation played a role in my success," he extolled.

Mr. Mulert outlined the valuable work of the Foundation and its donors in its 20th year and spoke about the upcoming 2015 Foundation Scholarship and Donor Recognition Gala on November 14 at The Ohkay Resort. Some Foundation highlights included:

"Our mission is to increase, manage and distribute resources for the benefit of the students, the College and community." 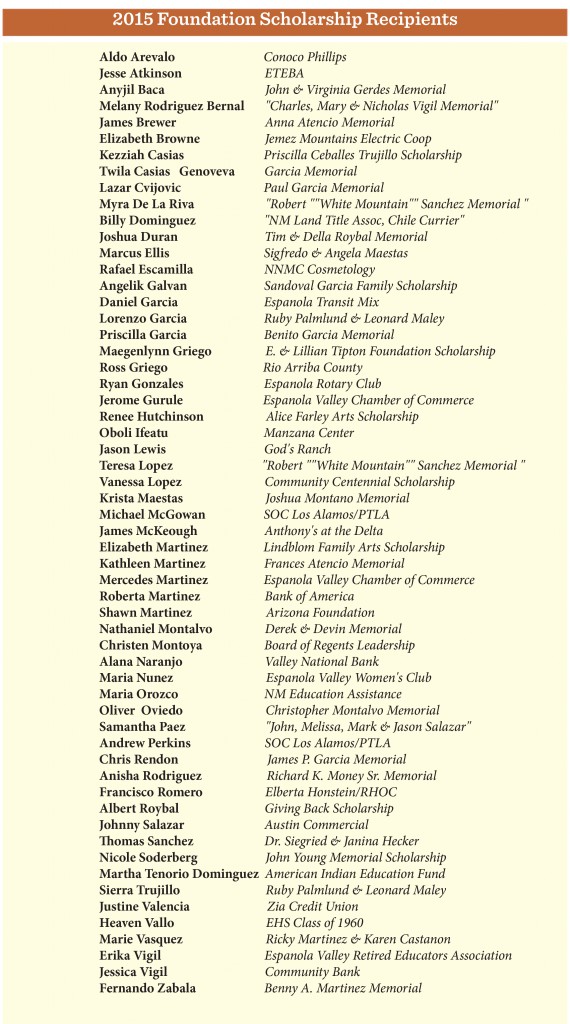