Northern New Mexico College recognizes, celebrates, and teaches the importance of June 19, 1865 -- Juneteenth -- the oldest nationally celebrated commemoration of the ending of slavery, known as emancipation, in the United States. 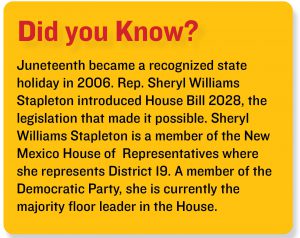 June 19th is a date that holds historic significance for all Americans, especially African Americans, but has been under-recognized outside of Black communities due to institutionalized racism in our curriculums, our policies, and public practices of history throughout the nation. NNMC recognizes the critical importance of Equity Literacy, being able to recognize and deeply understand these sorts of disparities and how to effectively respond to them. It is important to understand the historical origins of Juneteenth and other under-recognized historic events.

President Abraham Lincoln signed the Emancipation Proclamation on January 1, 1863, declaring enslaved people in Confederate territory free, paving the way for the passing of the 13th Amendment which formally abolished slavery in the United States of America. In 1865, it was on June 19th that the Union soldiers, led by Major General Gordon Granger, landed at Galveston, Texas with news that the war had ended and that the enslaved were now free. This was two and a half years after President Lincoln's Emancipation Proclamation - which had become official January 1, 1863, though The Emancipation Proclamation had little impact on the Texans due to the minimal number of Union troops to enforce the new Executive Order. With the surrender of General Lee in April of 1865, and the arrival of General Granger's regiment, the forces were finally strong enough to influence and overcome the resistance to emancipation and free all formerly enslaved people on June 19, 1865. 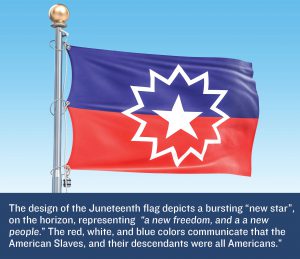 Juneteenth recognizes that African Americans were not free from chattel slavery until 1865, even though it was law in 1863. Slavers disobeyed the 1863 Emancipation Proclamation and forced enslaved people  to work so that they could continue to reap the economic benefits. These nuances are why it is critical to understand that the traditional celebration of independence held on the fourth of July in the United States needs to be complicated to account for who was and was not free on July 4, 1776. Emancipation Day observations have been celebrated for over 150 years in African American communities and are held on different days in different states in the South and Southwest, and in other parts of the nation, supporters of Juneteenth are lobbying for it to become a national holiday to unify recognition of the end of slavery and to recognize the institutional legacies of slavery.

As an institution of higher education, NNMC holds the responsibility to teach our campus and greater community about the significance of this historic day and create spaces for engaged dialogue about the roots of systemic, historical inequities which put us in a position to better address contemporary social determinants of health. 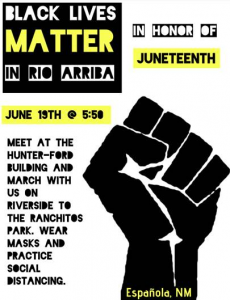 We invite you to participate in the inaugural Juneteenth celebration at Northern New Mexico College that will take place virtually, due to the COVID-19 pandemic response, on the Northern New Mexico College Facebook Page on June 19, 2020 at 8:00 a.m. to continue our commitment to addressing said issues. With gratitude to Ms. Willie Williams for presenting our campus with a Juneteenth flag, we will raise and fly the Juneteenth flag with the U.S. and New Mexico state flag for the next thirty days.

A March in honor of Juneteenth will also take place on Friday, June 19th beginning at 5:50 p.m. departing from the Hunter Ford Building. Participants are urged to wear masks and practice social distancing.

The Office of the President and Office of Equity and Diversity urge all students, staff, faculty and community members to become more aware of the significance of this celebration of American History and the African American heritage of our campus, city, state, and nation.