The Joy of Playing: Music Clinic with John Rangel 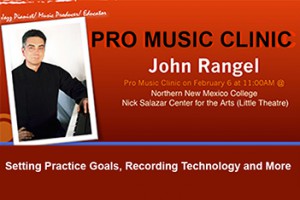 John Rangel is a multi-facetted active musician, composer, and producer. He has an extensive performance resume and has produced and recorded hundreds of musical recordings. John has written over 400 compositions for Jazz Quartet, Quintet, Big Band, String Quartet, Chamber Orchestra, Solo Piano works and others. A native of New York City, John has traveled around the world sharing and exploring his musical gifts.

John has been a professional musician for over twenty years. He grew up in a very musical family in New York City. His mother and his brother are opera singers and everyone in his family played an instrument. John's grandmother played jazz and taught piano. He attended Hunter High School (a gifted program) and studied at the Eastman School of Music.

John moved to Los Angeles in the early 90's. He became involved in the Movie Industry and studied Film Scoring with Charles Bernstein and Mark Isham. John also immersed himself in the rich vibrant culture of Leimert Park known as the "African Greenwich Village." Leimert Park is the center of African-American Arts in LA, brimming with poets, artists, and musicians. This community has been a major influence on John's musical direction and worldview. John is unique because of his tremendous range of musical experience; Jazz, Classical, Film and Television Music, Pop, Hi-Life, Salsa, Reggae, and Calypso to name a few.

John is now based in Santa Fe and he has won 14 New Mexico Music Awards. He was commissioned to write the "Solar Concerto for Chamber Orchestra" and also recorded Bach's Well-Tempered Clavier books 1 & 2 on a Steingraeber Piano using Bach’s well-tempered tunings. John Rangel is the rare combination of dynamic Composer and virtuoso Pianist.