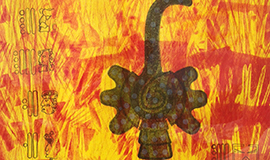 The body of work chosen for this show spans about a decade of creativity. An exploration of Mesoamerican culture and ancestral connections through weaving are the engines that drive much of Mier's current work. An exploration of Mexico's ancient civilizations and living art fills a place in the artist's creative thoughts. Rivera, Siquieros, Tamayo; all were gargantuan contributors to the Mexican movement that helped to inform some of the art work in this show. At first glance some of these compositions may seem incongruous, the intersections oblique, but a strong thread of the artist's own experience brings them together. 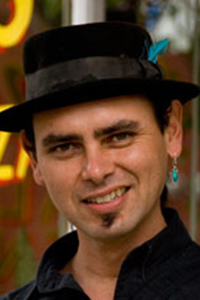 Ron Mier is Theater Manager/Technical Director at Northern. He has worked with various theater groups as a technical director, electrician, carpenter, rigger, pyrotechnics engineer, props master and general stage hand and actor. He is a co-founder of Teatro Paraguas, a bi-lingual theater company in Santa Fe. Ron was on the board of directors and helped produce many of their shows and scheduled events from outside the theater company. He has toured as technical director and production assistant and has facilitated shows in venues outside New Mexico.

In addition to theater, Ron is a professional artist, occasional musician and a native New Mexican. He is a printmaker, painter and weaver, collaborating with other artists for over twenty-five years in group shows and printshop settings. As an instructor, Ron has taught in institutions throughout the United States and currently works in his printshop and studio in Tierra Amarilla, NM.