The Northern New Mexico College Board of Regents and the College and Community Advisory committees are interviewing the final four candidates for President of the College today after announcing the withdrawal of a fifth finalist at last night’s Presidential Search Community Forum.

“Dr. Bill Flores wrote this morning to let us know that he is formally withdrawing his candidacy after receiving an offer to fill the position of president at another institution,” said Community Forum emcee Dr. Hugh Prather, who has been hired by the College to help direct the search effort.

The four remaining candidates each took about 10 minutes to introduce themselves to the audience of nearly 150 community members gathered at the forum event. Dr. Richard Bailey, Jr. was first to address the audience and emphasized his family’s commitment to live in northern New Mexico.

“In my career I have lived in forty countries and several locations in the U.S., and northern New Mexico is the place my wife and I intend to settle,” said Dr. Bailey, while explaining his family ties to the region.

Passionate about reviving the El Rito campus, Dr. Berryhill told the audience, “The best days of El Rito campus lie in the future.”

Next to speak was Dr. Andres Salazar, formerly a professor and administrator at Northern’s College of Engineering and most recently a Research Professor at the University of New Mexico main campus.

Dr. Salazar was born in San Juan Pueblo and remembers fondly the teachers in Española who helped him. “I want to give back to Española,” said Dr. Salazar.

Current Interim President at Northern Domingo Sánchez also addressed the audience as a candidate for the president position. “It’s all an issue of finances,” he told the audience while explaining his plans to strengthen continuing education and revive the El Rito campus.

After their introductions, candidates were seated on stage in a panel format to answer questions submitted to Dr. Prather by Community Forum attendees. The candidates responded to questions regarding strategies for increasing enrollment, financial fitness of the College moving forward, plans for the El Rito campus, and ensuring the college has committed high-quality faculty and staff.

To the last question, Dr. Bailey responded amid cheers from audience members, “We don’t have a quality problem. We have a resource problem. It’s the president’s job to resource the College, resource the faculty, and get out of the way.”

Community Forum attendees filled the rotunda area of the Center for the Arts to enjoy a reception and a chance to speak individually with candidates following the forum. Many positive remarks were shared regarding the future of the College and the presidential search.

Today, the candidates are undergoing rigorous interviews and will face a battery of assessments on the morning of April 20.  Anticipation will undoubtedly run high on campus over the next several days until the Board of Regents reaches its final decision and selects Northern’s new President. 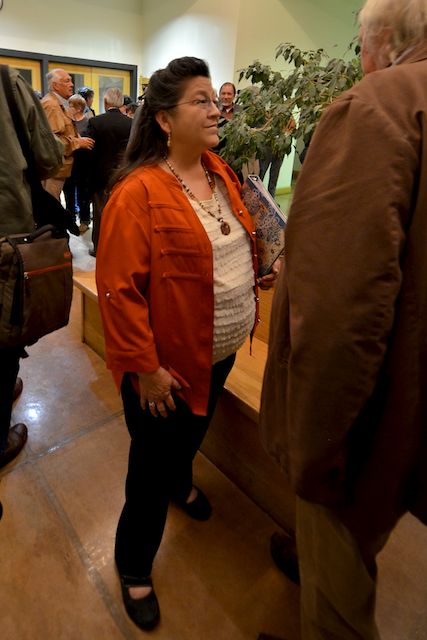